February 2022 marks six years that that I have been taking the anti-inflammatory asthma drug montelukast (brand name Singulair), which I started taking for my extreme mental fatigue. It has worked incredibly well and I have been back to normal for those six years. The following is a time line in my life related to Alzheimers and my treatment using montelukast.

2005 - My mother was diagnosed with early stage Alzheimers.

2009 - I retired from the the Dept of Veteran Affairs and moved from Atlanta, GA to the country of Ghana.

2015 - Early 2015, I began feeling extreme mental fatigue affecting my concentration. I saw a medical doctor in Ghana who ran all kinds of lab tests which came out normal. He eventually said it was likely early stage age-related dementia and recommend I get enough sleep and keep exercising. He did not give me a mental test but I don't think it would show anything. I have a degree in math and always do well in mental tests.

2015 - Dr Ludwig Aigner in Austria treated aging animals with montelukast and showed that montelukast reduced the swelling and over-activation of microglia immune cells in their brains and also strengthened the blood-brain barrier. He concluded that montelukast could possibly be used to treat Alzheimers and other age related dementias.

2016 - In February I made my first post on Alzconnected.org, which was about montelukast.

2017 - I started taking 10 mg 3 times a day after finding generic montelukast in Ghana, which costs much less the brand name version.

2018 - Intelgenx, a small Canadian medical technology company, began a clinical trial for mild to moderate Alzheimers under the supervision of Health Canada, Canada's equivalent of the FDA. It was halted in 2020 due to Covid-19 and funding problems.

2019 - Emory University started a FDA montelukast Alzheimers clinical trial which was halted in early 2020 due to Covid-19. It is expected to restart in early 2022.

2020 - In May my mother passed away in Atlanta, GA with late stage Alzheimers. I have been in Ghana for the past 11 years and could not be with her, but I suggested to my sister that they could try montelukast. She said the doctor wouldn't allow it.

2021 - Emory restated the clinical trial and cut the number of participants from 150 to 32.

2022 - The Emory montelukast Alzheimers FDA trial was completed on 18 November 2022, and is in the data analysis phase. Emory is not giving out much information but hopefully they will announce results in January 2023. I will posts updates for both trials.

My question is, did I have the beginning of some kind of early dementia in 2015, and do I have it now. I can't answer that question, but I am sure that montelukast ability to reduce neuroinflammation has brought me back to normal. Alzheimers and other age related dementias have many different pathologies, but they all have in common increased neuroinflammation. We should know more about montelukast's effectiveness when results are announced at Emory.

Multiple dosing per day will give better results

Most of the clinical trials going on around the world using montelukast use the approved dosage for asthma of 10 mg once a day. Once a day dosing will likely be ineffective in these clinical trials for various medical conditions, whereas dosing multiple times a day could show good results.

The Intelgenx montelukast Alzheimers clinical trial has restarted in January 2022 after Health Canada approved higher dosing per day than the approved 10 mg per day asthma dosage. Intelgenx has decided on 30 mg twice a day (60 mg total) for one group of patients. The Emory University montelukast Alzheimers FDA clinical trial has also restarted using dosing up to 20 mg a day twice a day. Multiple times a day will give the best results for various medical conditions and have the fewest side effects.l 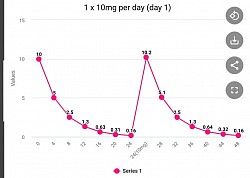 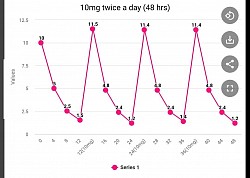 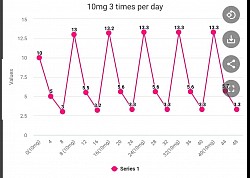 The following is a great overview of immune system involvement in Alzheimers. I am a follower of the concept that the robust immune system that evolved to protect us when we are young becomes overactive and off target when we grow old, and montelukast and other leukotriene blocking drugs can reduce the overactivation of the immune system in middle and old age.

Emory University has stated in their latest postings on Clinicaltrials.gov that their completion dates will be in October and results will be announced in December 2022.

It has been a long wait because of the nearly two years delay due to Covid-19. I believe the results will be positive due to my own experience with this drug.  Posted in Aug 2022

A tale of two trials

The Emory FDA montelukast Alzheimers trial started with 150 participants in 2019, half to be treated and half on placebos.The treated participants would take up to 20 mg twice a day for 12 months. When the trial resumed after the the Covid break, Emory cut back the trial from 150 to 32 participants, I believe, due its race with Intelgenx Medical Technologies over who will announce clinical trial results first.

Intelgenx, a Canadian company, had already started its montelukast Alzheimers trial in 2018 under Health Canada supervision, with a planned 70 participants, half which were to be treated and half to be on placebos for 26 weeks. The approved dosage was 10 mg once a day, the same as the approved dosage for asthma. Intelgenx was having problems funding the trial and the trial was halted just before the Covid break.

During the Covid break, Intelgenx secured additional funds for its trial and also received authorization from Health Canada to treat participants with up to 30 mg twice a day.

Here is what I think happened next. With the resuming of trials approaching in late 2021, Emory realized that Integenx was now in a position to complete its trial using a more effective dosage and ahead of their own. In order to come out with results first, Emory reduced its participants to 32.

As it stands now, Emory has 32 participants in its FDA double-blind placebo controlled study with treatments lasting 12 months and dosages up to 20 mg twice a day. In their last post on clinicaltrials.gov, completion is expected in October with an announcement in December 2022.

Intelgenx under the supervision of Health Canada has 70 participants in a double-blind placebo controlled study with treatments lasting 26 weeks and with dosages up to 30 mg twice a day. Their latest post on clinicaltrials.gov gave an expected completion date of October 2023. We will have to wait and see when they will announce results.

In the case of Intelgenx, a positive result from its larger trial could result in its version of montelukast being approved for Canadians as an Alzheimers treatment.

I found a great well-researched article on leukotrienes written by a PhD holder in molecular biology that explains their functions without getting into a lot of difficult medical terminology.

Montelukast will still be the preferred leukotriene inhibiting drug for Alzheimers and dementia because, according to Astra Zeneca, AZD5718 can not cross the blood-brain barrier to any significant degree.

Inhibiting cysteinyl leukotrienes with montelukast and other leukotriene inhibitors could bring positive results.

1. Lowering the activity of white blood cells (eosinophils and mast cells) for a lower immune response and less inflammation. A immune response that is too high, which is often the case in older people, can increase aging and cellular damage.

3. Reducing brain microglial swelling and over-activation which drives neuro-inflammation present in Alzheimers and other dementias.

4. Reducing blood-brain barrier leakiness, which is a characteristic of Alzheimers and dementia.

AZD5718 inhibits both B4 and cysteinyl leukotrienes but does not cross the blood-brain barrier in a significant amount. However according the mentioned article, inhibiting B4 could possibly promote these positive outcomes:

1. Inhibiting production of plaques inside arteries and reducing the incidence of heart disease.

2. Helping to improve the condition of patients with Chronic Obstructive Pulmonary Disease (COPD).

5. Being more effective than montelukast in treating asthma and allergies

We should get more information about inhibiting B4 and cysteinyl leukotrienes upon completion of the three ongoing AZD5718 trials, which is estimated to be completed for kidney disease (late 2022), for heart disease (2023) and for asthma (2024).

Leukotrienes are powerful signaling molecules that increase immune system activation when we are under attack by bacteria, viruses and other agents. They have allowed humans to survive for hundreds of thousands of years in a hostile environment. But with modern medicine and public sanitation, we may not need such a powerful activation of our immune system that can increase cell damage especially as we are older. It appears that leukotriene inhibiting drugs like montelukast and AZD5718 and other drugs to come can slow down the over-activated immune system in older people and allow them to live longer and healthier lives.

You can find scientific references in the above mentioned "selfhacked" article.

This long term study at John Hopkins University found that high levels of cell-free DNA circulating in the blood stream of older individuals is associated with chronic inflammation and early signs of frailty and dementia. As cells die and rupture, DNA fragments are released into the bloodstream. The body's immune system sees these DNA fragments as foreign and something that needs to be removed, and it runs at a higher rate than it should. This results in chronic inflammation and the premature destruction and aging  of tissue and organs. We may not have a way to prevent free range DNA, but I am convinced that we have a way to reduce the chronic inflammation that accompanies it. We can slow down leukotriene signaling, which increases cytokine production and chronic inflammation, by taking leukotriene inhibiting drugs such as montelukast. I think that when the Emory University montelukast Alzheimers clinical trial results are announced in December, we will see that this drug will reduce chronic inflammation and have a positive affect in treating Alzheimers.